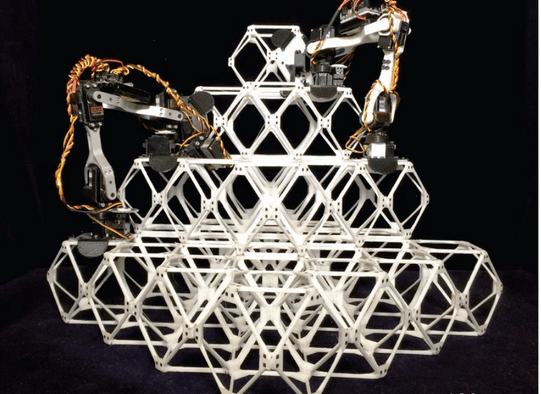 Building a spacecraft or an airplane is a time and money consuming task done through many stages. But now with the help of a new form of a new form of manufacturing robots called Assembler Robots, this task might just become much easier.

These robots view themselves as a part of the structure rather than as objects that they are helping to build. “What’s at the heart of this is a new kind of robotics, that we call relative robots,” Professor Neil Gershenfeld of MIT’s Center for Bits and Atoms said in a press statement, who is collaborating with Ph.D. student Benjamin Jenett on this project.

The assembler robots are a whole new class of robots that are simpler than those expensive factory bots while being still more capable than the cheap bots, having the capacity to build huge structures like airplanes, rockets, or bridges.

The robots were named as BILL-E, an acronym for Bipedal Isotropic Lattice Locomoting Explorer, as a nod to the 2008 Pixar film Wall-E. The robots move in relation to pieces it’s building, called voxels, ensuring that no expensive navigation systems are necessary for it to get around. As voxels are added, the tiny robots adjust their positioning relative to the structures, making it cost-effective and also makes quicker to repair.

Moving around like inchworms, clamping onto the voxels by opening and closing their V-shaped bodies, the tiny robots can each count their steps on the structure they’re building, Gershenfeld explained. “It’s missing most of the usual control systems, but as long as it doesn’t miss a step, it knows where it is,” he said.

For structures such as space stations and lunar habitats, the robots would essentially live on the structure, completing continuous repairs.

The assembler robots work together with the help of special software, speeding up manufacturing. NASA and Airbus SE, both sponsors of the research, are interested in potentially adopting the technology.