At 77, SK Dhawan received a PhD from IIT-Delhi 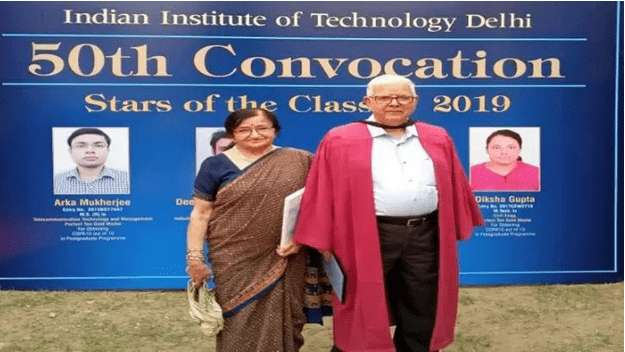 There is no age restriction for learning. If you are willing to learn, time will never be a constraint. Sushil Kumar Dhawan received his PhD from IIT Delhi recently at the age of 77, proving age is never a barrier. Due to the troubled financial condition of his family, Dhawan could not continue his education after class 10 but his urge for knowledge drove him ahead and Dhawan gets to live his dream of earning a doctorate degree.

He completed his research in ‘expecting remaining life of existing reinforced concrete structures’, being awarded at the 50th convocation ceremony of IIT-Delhi. He also has a bachelor’s, two masters and one MPhil degree.

His desire for gaining knowledge spurred him to study alongside his work. Despite he left mainstream education after completing class 10 and did an ITI course to join CPWD as a draughtsman, he continued to educate himself. He received his first B.Tech degree from AMIE followed by an M.Tech from IIT-Delhi, an MPhil from Punjab University and a Master’s in Urban Development from Birmingham University, UK.

However, this is not Dhawan’s final destination. Presently, he is working as a visiting professor at the same department and guiding the other students.

Inspired? Know more about Sushil Kumar Dhawan’s inspiring journey from the given source.

Urmi Khasnobish is an experienced copywriter at Next Education India Pvt.Ltd. She is an avid reader and a voracious writer with a strong background in journalism. As an enthusiastic blogger, she often indulges in writing on topics of relevance to the Indian youth.

Previous Article
IIT-Delhi is all set to combat air-pollution with its new tech-solution
Next Article
1,176 counselors recruited for Navodaya Schools