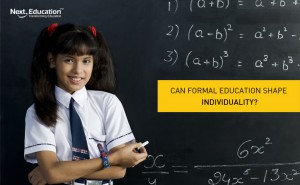 “Everybody is a genius. But if you judge a fish by its ability to climb a tree, it will live its whole life believing that it is stupid.”

This quote of wisdom (from Albert Einstein) provides a simple yet profound interpretation about the human personality and its inborn uniqueness. An individual’s personality is shaped throughout his/her lifetime by multiple causal influences, which impact his/her psyche and help develop his/her belief. Parenting, first hand observations and experiences, family and peer interaction, schooling, religious beliefs, regional influence, media exposure – all these shape an individual’s perception towards life, especially in the formative years. The importance of schooling in this crucial process is long acknowledged, but how well is it understood? In other words, is our education system mature enough to effectively contribute to a child’s individuality?

The traditional education system provides common study materials for all children – with similar content to learn for at least 12 years of schooling (till Class X). The intensity of teaching efforts may vary based on an individual child’s perceived capability to imbibe knowledge, but the core teaching content and, consequently the teaching approach are largely the same. With this one-size-fits-all approach, it is not possible to analyze the impact of education on a child’s psyche effectively. The school education, in such an environment, essentially boils down to being a mandatory milestone, which has to be achieved to qualify as an educated individual, who is capable to pursue higher studies aligned to one’s choice of profession. Furthermore, schools often treat children as persons who are not capable of framing an opinion, and have to be taught everything through instructions – and the primary skill demanded from a child’s psyche is to follow and implement these instructions. Such an approach amounts to a gross under-utilization of the human mind as even a child’s mind has unfathomable richness. Inevitably, there are some children, who struggle and are unfairly labelled as ‘weak’ students – or worse, have their intelligence questioned. The fact that not all students react similarly to this static educational approach proves that their learning needs are much more varied than the mainstream education system is willing to acknowledge.

It is not that the parents are unaware of their children’s need to learn beyond the curriculum books – as they give immense importance to the process of choosing their children’s school, even coughing up substantial school fee. But the veracity of this process can get unintentionally undermined if the decision drivers include shallow assumptions like the ‘prestige’ factor associated with their children’s prospective school will influence their own social standing among their peers. Such emotional loopholes are easy to exploit, and have promoted what is perceived to be commercialization of the education sector.

Fortunately, there have been some explorations and advancements in the pedagogy science, which have resulted in some education approaches that do acknowledge a child’s natural psychology and respect the uniqueness in their personality. Montessori System has been amongst the most enduring and well-known of such educational approaches. While this system is yet to acquire mainstream adoption (the associated cost may be prohibitively expensive for many), their development into mature pedagogical models can at least engender the debate on what’s lacking in the mainstream education system – and where the opportunities for improvement lie. It is about time that the ubiquitous quote: ‘every child is unique,’qualifies as a mission statement of the mainstream educational approach.

Digital classrooms are worth investing in
Next Education April 22, 2015

Digital classrooms are worth investing in

How the Brain Learns to Read – Prof. Stanislas Dehaene
Next Education January 5, 2015