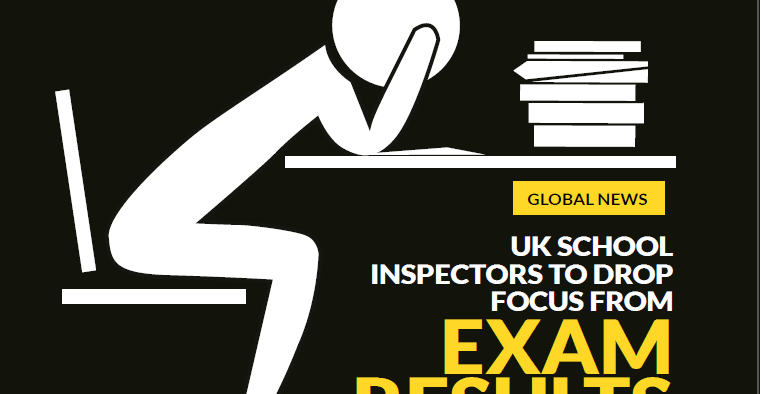 School inspection in the UK is about to undergo a significant transformation in terms of the criteria for the judgement of the standards of schools. The Office for Standards in Education, Children’s Services and Skills (Ofsted), popularly known as the ‘education watchdog’ of schools have declared that the influence of exam performance on school ratings will be downgraded. Instead, the focus will be on the quality of education disseminated by the schools. This will include an all-around evaluation of the curriculum and pedagogies, and how effective they are in promoting 21st-century learning.

The declaration came in the wake of increasing complaints that the focus of the inspection primarily depends on exam success. This leads to increased pressure on school administrators to show good results, which in turn adds to the stress of students to perform well. This has given rise to an illegal practice of ‘off-rolling’ students, in which schools drop off the records of disadvantaged students to boost performance data. As a result, thousands of students are ‘disappearing’ from the school rolls. Ofsted has stated that due to a narrow-vision reckoning of school performance,  the schools are losing sight of their moral accountability and core purpose of developing the social and emotional capital of young learners.

Narrowing down of curriculum

Schools have also been accused of narrowing down the curriculum to boost results. For example, primary school students are told to concentrate only on their school textbooks while studying English language and literature, and not encouraged to read additional texts by other authors to supplement their knowledge. As a result, students drop extracurricular interests such as art, music, dance, languages and sports to concentrate on exam subjects, which leaves no scope for holistic school education.

According to the new framework of inspection, it is important to evaluate how the student is learning and whether those learning methods have an effect beyond the exam results. There will also be a greater focus on student behaviour, with separate emphasis on ‘personal development’ and ‘behaviour and attitudes’. Additionally, inspectors will no longer be using schools’ internal performance data developed by teachers as evidence for inspection, which should help reduce the teacher’s workload. This, according to Chief Inspector Amanda Spielman, should bring substance and integrity to the framework of inspection by giving students and instructors exposure to the best practices in education and treating them less like machines for producing best statistics.

A positive step towards quality education

The Department for Education Secretary Damian Hinds has passed the government’s approval regarding this plan, calling it “a hugely positive step forward” for all schools in the UK. The changes have been greeted with much enthusiasm by educators, for it suggests a shift from the exam-focused view to a more balanced vision of education. Teachers are also pleased that the excesses of bureaucracy have been dismissed in favour of focusing on the development of effective teaching-learning strategies.

Moreover, Ofsted’s inspection reports are an important criterion for parents while selecting schools for their children. However, a study conducted in 2018 shows the proportion of parents agreeing that Ofsted provides a reliable measure of a school’s quality has fallen from 66% to 59%, the lowest in three years. For most parents, the most important things in education are their children’s happiness, their enjoyment of learning, and inculcating positive behaviour such as resilience and self-confidence in them. This move has therefore been welcomed by them.

Thus, this decision, proposed to be active from September 2019, will help in truly recognising the flaws in schooling as well as the good work done by schools in the UK in providing quality education.

With 6+ years of experience in the publishing industry, Neha caters to various domains of communication and heads Content Marketing at Next Education. She is an avid reader and fiction is her favourite genre. Her interest lies in travel, dance and music.